I'll have a medium please 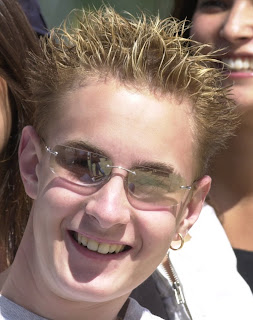 I had one of those regular, ‘Adam’ moments just now and, as I often do, took a while out to dwell on thoughts about him, I often sit and watch his video or re-read the writings on the blog, some days its comforting and some days not. Today not sadly, so I write this amid mountains of Kleenex and whilst watching a blurry screen through tears.

The grieving process is a weird one and the thoughts that prompt outbursts of emotion are manyfold, varied and unexpected at the best of times. In particular I am most vulnerable to tears when people are kind or giving praise.

I saw a medium yesterday, one that I’ve seen before and she got as close to convincing me that she was properly in touch with Adam as anyone ever has, I guess the thing about believing is that there comes a point where you have to either trust it or not, being someone who needs proof and evidence for anything that I am unsure about it is hard to convince me but when I asked how his leg was and she replied, ‘not sure if this means anything to you but he says its back’ I was as near convinced as I think I can be.

She also mentioned him holding an electric guitar, she said a blue one, and those of you who are young enough to be on facebook may have noticed that I recently added a photo to his tribute page that shows him holding an electric guitar, not a blue one, a yellow one but hey the communications from the other side aren’t by Vodafone you know. (that’s probably why they are so clear and the signal holds)

SO… for anyone who does believe, then Adam is apparently having a ball, in a place where you get everything you want, helping other children with their journey across the worlds, only experiencing pure love and none of the negativity of human emotion and is whole in body again and helping many of us from afar, he is also bashing me around the head for feeling guilty about him dying and he thinks I need a holiday!

The medium said that he told her about the unique (some might say sick) sense of humour that he and I shared and he says that that connection is still there.. She then said he is taller on the other side… anyone who has witnessed him and I standing back to back in front of a mirror arguing about who was the tallest might just see his personality coming out there! I am now waiting to see him on the other side and find a huge mirror!!!