Adam went to the hospital this morning to meet the doctor who is to cast the socket for his artificial leg, the guy was interested to know about the Dumball rally and he was interested to help with some of the logistics, Adam walked the parallel bars twice on Friday with a temporary artificial leg, we plan to get Adam to try walking with crutches for a short distance so that, in an emergency such as a fire in a hostel in Bulgaria, he will be able to move independently. He isn’t supposed to put weight or strain on the right heel but in an emergency I guess anything goes!

Plans for the rally are well underway and we begin to realise that there are a lot of logistics still to resolve, not least getting the car registered urgently so we can legally dispose of it!

And then there’s the more important issues like, what colour super soakers do we buy to ensure that we can do proper water fights on the way!!!!

I should have done this update yesterday.
We had latest consult with the prof yesterday; this was also the time we would get the results of the last chromosome test on his marrow.

I had asked the registrar to tell me the results of the test over the phone at the end of last week, she asked if I was sure I’d want them over the phone because obviously they can be bad as well as good, I said I was ok with it as it would determine whether I went with Adam and Pauline, she emailed me back to say that the results were in but were being posted straight to the prof and she couldn’t get then over the phone.

Which was an excellent lesson in don’t ask a question if you cant face the answer, I naturally assumed she wasn’t telling me because it was bad news and spent the weekend fretting, finally my fretting got the better of me and I emailed the prof to ask the same question, he replied to say that the result couldn’t be given in 10 seconds or by email but that they were very good, not zero but very close and he would then be out of contact till clinic!

So I went to clinic!

The results were good, and Adams bloods are near normal so the plan is to continue at the moment, Pauline queried the dosage on the silver bullet drug, Dasatinib as this had been lowered a while ago owing to a reduced platelet count and it was agreed that his dosage be upped.

The prof also decided to stop a couple of the other drugs he’s been on so he was pleased to be released from taking them.

The next consult is early in June just before the Dumball, and will be mainly to monitor the effects of increasing the Dasatinib on his blood counts.
So, for now, he’s enjoying cruising around in his car….

have car will travel... anyone seen my boy? 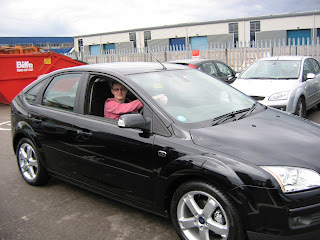 With a bit of skulduggery and some advance planning, I managed to get Adam to the car dealership without him knowing that his new car was there waiting and ready for him to drive away..

We went in under the pretext of him needing to sign some forms and he was confused when the guy gave him a tax disc and some keys and said, there you go!

SO, he took me for a drive then we came home to meet the documentary makers that are to film the Dumball rally and he's now buggered off somewhere with Lauren for a drive.

Obviously getting in and out is difficult and he needs a hand with it but once in the car,he has his independence back!

If anyone knows of a company who wants to sponsor a panel on the Dumball car by having their logo on it then please let them know to contact me. If anyone wants to sponsor our effort to get to Istanbul in a 'reasonably priced' car then navigate to www.justgiving.com/dumball PLEASE be sure to mention me or the Adam's Apple's team so we get the credit!

Adam home agrees with him 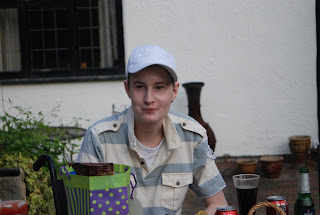 Adam had a good weekend, he is in a much better place mentally now and it is like having the old Adam back.

He is in pain with his heel, lungs, back, wrists, fingers, and bones generally and is fed up with things hurting but he is much more positive than of late and this changes the mood all round at the moment.

We are not due back to UCH until the 22nd May when we’ll hear the results of the latest chromosome test, my instinct tells me it’ll be clear and I hope to goodness that my instinct is right!

So for now there is an air of normality that has befallen us, it’s a welcome one that’s for sure.

MR HORN HAS LEFT THE BUILDING

Took Adam back into the hospital Sunday evening and spent the day with him yesterday chilling and chatting, he went to the gym and did a tiny amount of physio which he enjoyed, then eventually the docs did their rounds and asked how he got on at the weekend, ‘fine’ he answered, ‘ok’ they said ‘lets think about making you being at home a more permanent thing’ ‘yes please’ he said, ‘how soon’ they said, ‘how about now’ he said, ‘ok’ they said.... 'best get packing' I said!

So we packed everything up, met the transport guy and brought Adam home late last night.

It felt a bit like running away from school or playing hookey as it wasn’t planned, but like all those days in your childhood when you are playing hookey, all the more precious as a result!

The weekend really did the trick and he has a much more positive head on him at the moment so we hope to build on that as much as possible.