OK, OK, I’ve had enough of the ‘you haven’t done an update for ages’ comments so I have put finger to key and typed the following…

We are in something like the eye of the hurricane at the moment, Adam is generally feeling pretty good, spends much of his time keeping Bailey from jumping on the sofa, well trying to at least and adding various bits and pieces to his car, apparently the big tube thing now sticking out of his rear bumper is his new custom exhaust pipe which is vital to make the car go better. The ice cream cone thingy under the bonnet is an induction kit to make it go faster and the new hifi which can break windows from a hundred paces is to make it go noisier.

Bailey has managed to chew most of the house now and I’m not at all disappointed by the new wallpaper in the day room being his favourite chew toy, the cable TV remote looks so much better with bite marks than it did before!

We had a little scare recently when he got in drunk one night, started throwing up blood in a big way, like a horror movie and ended up in an ambulance on the way to the local hospital, 3 days later and the docs confirmed that his gullet was irritated by the various drugs he’s been having and was bleeding which was the cause of the huge blood clots he threw up, some rest, a few of the NHS’s finest platelets and some more drugs and he came home, tired but feeling better.

His new hobby is ordering things on the internet, having them delivered when we are all out (during which time Bailey is chewing the furniture) so they get taken back to the depot and I then go to pick them up. It’s like Christmas every day in the house as boxes and packages arrive almost daily.

And if anyone sees my brand new mountain bike being ridden by a scroat in the Ewell area please feel free to go and knock him off it, anyday now, it’ll have been stolen for longer than I actually owned it! Still, whilst i was driving round Ewell to find the perp, having someone run in to the side of me took my mind off it quite well. reckon i'll stay indoors for a week rather than try my luck!

have bailey will travel 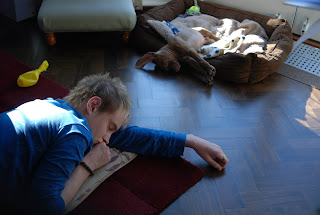 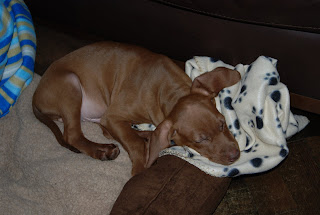 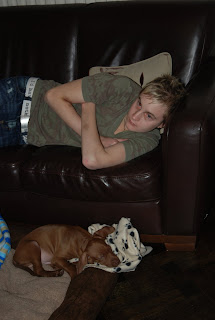 anyhow..... just to prove that even an immoveable object can move sometimes, meet the new love of Adams life... Bailey.

Adam has now finished hte latest round of Chemo, the prof added one extra dose for good measure, not quite buy one get one free but something like...... this weeks counts were a slight improvement from the previous weeks, perhaps a smile on your face really can affect your state of health!
Posted by Colin at 19:38 1 comment: