Coincidence - or the boys work? 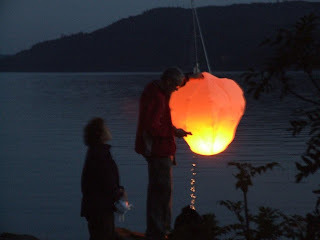 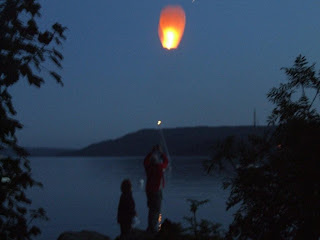 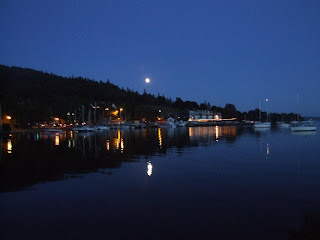 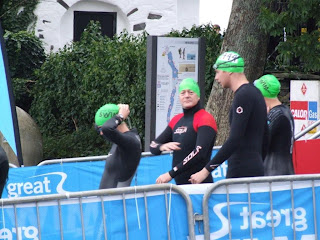 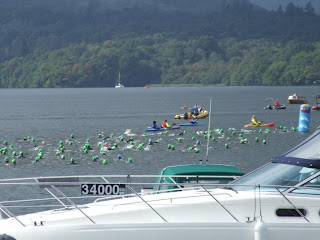 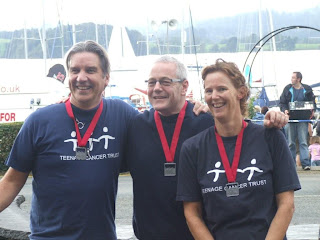 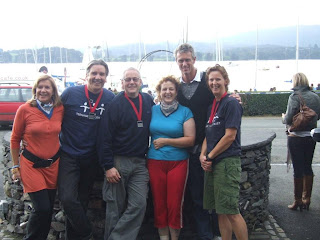 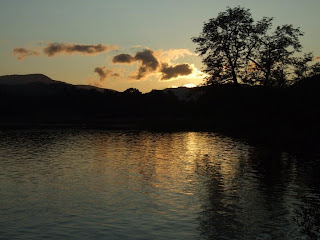 read the previous entry first (the blog is in chronologic order)

Have you ever had a day or a period when, without planning, there seems to be a synchronicity that joins the events of the day into one fluid apparently spontaneous thread. (for instance I would not have been here in Windermere if Simon Davies from TCT hadn’t sent out his email about doing the event and, having forwarded it to numerous people to try and gain sponsorship, if Anisa hadn’t emailed back to point out the date of the event and suggest that it was something to do and if Jackie hadn’t decided to walk 90 miles and co-incidentally end up in Lake Windermere.)

I had set an alarm for 07.30 as it’s customary in the B&B world that is the lake district, to be ready for breakfast sharp and on time and my host for the weekend, Mike, had decreed that breakfast would be at 08.30 (I am putting on weight but having had a huge dinner the night before, I needed to set my alarm to ensure that I took on calories to prepare me for the swim (honest guv!)

5.50? Well of course! 23 years ago at 5.50 the boy was making his first appearance in the world amid much screaming and yelling from his mum.

Having enjoyed the full English preceded by the bowl of fresh fruit (its slimming you know) I met with Jackie and Mick and, after the most creative of journeys (note to organisers of Great North Swim…1 road in, 1 road out, one boat that can carry 80 people an hour, and 2200 participants plus hangers on and spectators makes for a logistical challenge of epic proportions – will be improved next year I’m sure), We found ourselves in the lobby of a very fine hotel meeting Simon and Geraldine, Simon handed me a package that a kind soul who lost their child a while ago had sent for us, it contained 6 Chinese lanterns and, knowing that some friends had set some off in Thailand at midnight on new years eve for Adam I immediately determined that we should let them go on the lake at sunset ‘he would like that’ I thought.

Its odd; we all seem to do a lot of ‘he would like that, or would have liked that’ I guess it’s a good way of keeping his memory alive, I still talk about him a lot and engage in conversation with him about things.

The Great North Swim is a mile open water swim in Lake Windermere, the lake temperature as we all jumped in to ‘warm up’ for 10 minutes was 15.1 degrees. (Note to GNS organisers, WARM UP? 10 minutes in the water to get used to the temperature? ARE YOU MAD!!!)

Whilst treading water I spoke to a couple near me and we were all bemoaning the fact that it was overcast and cold, I announced with all authority that the sun would come out as we lined up for the start, naturally they looked at me like I was mad, ‘trust me’ I said, ‘I know it will’

I knew it would because, right since the day that we chose his grave and as we walked towards it the clouds parted and a beam of sunlight seemed to track across the cemetery and stop over the grave, every big event for Adam has had good weather or just at the appropriate moment the sun has come out.

We got out of the water and, as we stood on the start line, sure enough the clouds parted, the sun shone and we were bathed in the warmth of the sun, I looked at the couple, they looked at me (oddly). I smiled, they smiled back, I looked across the way at Jackie, she looked at me, then upward and smiled the same knowing smile as me…. And, as we entered the water, I felt that the sun would shine until the end of my race and then it would rain (I decided not to voice this feeling as the others would really think I was crazy!)

So, I swam, with a couple of hundred others in my wave, quicker than I imagined I would, but slower than pretty much everyone else, save for the woman who, as we got to the last buoy and turned for the shore, was behind me and said, ‘oh look here comes the rain’ … go figure!!!

There were other ‘coincidences’ during the day but suffice to say that by the time sunset came, Jackie, Mick and I were sitting on a couple of large rocks that were in the lake and as we watched the sun fall and the light fade I received a text from Pauline who was having a pretty rough day saying that she was driving but watching a beautiful full moon whilst driving, no sunset, just dark, clear sky and a full moon, with a ‘sad’ face.

We looked around us and marvelled at the fact that we had no moon at all, just a beautiful view

of the sunset over the lake, it got darker and we sat, absorbing the atmosphere, waiting for darkness before we lit the lanterns. There seemed a magical quality to the time there and suddenly, without warning, and fast enough that you could see if move, the fullest and brightest of moons emerged above the hillside to our left. Orange sky sunset to our right and full moon to our left.

As the hairs rose on the back of my neck I knew that Adam would have known how much that kind of night meant to me and how much I enjoy the spectacle of the displays mother nature often lays on for us all.

We lit the lanterns and were amazed at how high they soared and how great they looked as they glowed a flickering orange from the flame that gave them the life to rise and stay aloft.

I did my modern man thing and shed some tears as my mind was filled with thoughts of Adam and the pain deep into my soul that I can only liken to feeling like my insides have been torn out of my body rose, it was a mixture of the sadness of missing him and the feeling of closeness with him that was new to me.

Jackie and Mick quietly disappeared and left me alone on the rock, enjoying the solitude, feeling the atmosphere and watching the occasional bat fly low then skim down and snatch a midge or mosquito .

And there I sat, crying, missing, longing and wishing; feeling as if Adam had stage managed the whole day to ensure that I was there, by a series of co-incidences, on a rock over the water in the sunset feeling closer to him than on any day since he died….

As I left the rock I felt a calmness of mind and an enormous positivity, I took a call from a friend and was re-telling the events when I thought to myself that of course, having helped me in organising a few events, Adam would have wanted a big finale…..Just as a firework display started on the top of the hillside…. BANG ON SON!!

It was hard to leave the lake as I didn’t want the feelings to end… but having used endless calories I felt justified in indulging in a huge dinner again, before planning the next full breakfast (it’s only polite you know !)

And, the following morning, still full of the previous days events , I walked down to the lake to try and recapture some of the feeling as if by doing so, I would re-connect with Adam once more, but when I got there, there was no feeling, just a sense of having achieved some kind of mission.

The strange thing was that I didn’t realise I was on a mission before I got there and it was only after the event that I was able to reflect that perhaps I was always destined to go there and be there on that day and at that time. Thoe of you with a spiritual bent may understand it better thean I.

To all of the people near and far, who had a hand in me being there and experiencing something that was truly magical, you know who you are and I thank you from deep in my soul ,for you contributed to something priceless that I wouldn’t have missed for the world.

And maybe, just maybe, I should be thanking our beautiful son for knowing well what his dad needs nd finding the energy to move a few pieces of our lives around …

There are some photos on the blog at http://www.adamhornblog.blogpsot.com/
Posted by Colin at 19:00

Hi Colin
Glad you felt close to Adam at the lake. I've experienced grief and know only too well that feeling as if part of you is missing.
Sadly, all you can do is drag your backside out of bed every morning and see what the day brings!
I met Adam; great kid wicked sense of humour!